Our Fight Against Torture

Solitary confinement is the practice of confining someone in conditions of extreme isolation.

Getting the practice ruled unconstitutional has been a major goal of both CCLA and BCCLA.

We went to Canada’s highest court for a showdown with the federal government.

Why Solitary Confinement is an Issue;

The UNs Mandela rules dictate that being in solitary for more than 15 days is torture. If 15 days is considered torture, then why is the Canadian standard so much lower than that?

A key prison researcher in Canada conducted interviews with prisoners and concluded that segregation is “the most individually destructive, psychologically crippling and socially alienating experience that could conceivably exist within the borders of the country”. This was published in 1983 – over 35 years ago.

When you’re in solitary, every day feels like a nightmare.

We fight for the rights of people who live this nightmare.

CCLA has long worked to uphold the rights of prisoners particularly with respect to the concerning segregation, and the disproportionate representation of vulnerable groups in segregation including individuals with mental health issues, and Black and Aboriginal Peoples.

Our Work To Stop Solitary Confinement.

CCLA advocated on this issue, bringing an international expert on solitary before the jury at the Ashley Smith inquest jury; CCLA, has reached out to government actors on several occasions; we have spoken out publicly against various corrections bills that did not fix the problem; and we have been fighting in the courts for over 5 years.

CCLA successfully challenged the solitary confinement regime known as administrative segregation, first at the Ontario Superior Court on the basis of a lack of independent review.

We were successful again at the Ontario Court of Appeal which found that the practice of prolonged solitary confinement (over 15 days) constitutes cruel and unusual treatment, violating s.. 12 the Canadian Charter of Rights and Freedoms. Canada appealed the Court of Appeal decision several months ago, but today informed us that it was dropping its appeal.

This is an important victory for every person who is or has been held in solitary, and it has been a long time coming.

Over a Decade of Work:

CCLA has argued that the law allowing for solitary is unconstitutional for 5 different reasons: 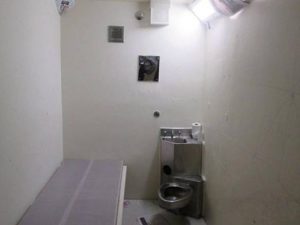 Photo of a typical solitary confinement cell.
The Office of the Correctional Investigator.

“Our message is clear. The government must end the torture of indefinite solitary confinement. The courts have laid out a path and the government should stop fighting and obey the court orders,”

Solitary has been used to punish criminals guilty of various offence levels for many weeks, months, and even years.

One prisoner, Adam Capay, spent a total of 1,647 days in solitary when the international rules say anything over 15 days is torture.

Children and mentally ill individuals are being put in solitary confinement.

One of the most well known of these was a teenager named Ashley Smith whose story you may be familiar with. By fifteen she had shown behavioural problems by throwing crabapples at a mailman, trespassing, and other small incidents. She was undiagnosed at the time and would end up spending much of her youth in juvenile detention facilities for minor offences.

Mental health supports and rehabilitation opportunities were not adequately provided, and she was continually penalized for various behaviours, including self-harm, all of which led to a negative spiral of behaviours, consequences, and reactions.

At the tender and terrified age of 18, she was considered a “difficult” inmate, transferred into an adult federal penitentiary, and placed in solitary where she continued to self-harm, often by tying ligatures around her neck. The tragic end of her story is well-known. The warden at the prison decided that Ashley was seeking attention – which may in fact be true, as she must have been desperate for human contact – and ordered prison officials not to enter Ashley’s cell unless she had stopped breathing. And so, on October 19 2007, four prison officials stood outside Ashley’s cell and watched as she tied a ligature around her neck for the final time and stopped breathing.

Ashley Smith was 19 when she died that day and had spent around 11 and a half months of cumulative time in solitary confinement.

We were a party at the inquest and fought for justice for Ashley and for her death to be recognized as a homicide.

Huge victory against racial profiling at Quebec Superior Court. The decision can be read here:

The first day of trial in Quebec Superior Court; proceedings are expected to continue throughout June 2022.

CCLA files materials to participate as a conservatory intervenor.

An amended originating application is filed in Quebec Superior Court.

August 30, 2022
Earlier this summer the Canadian Civil Liberties Association and a number of other groups urged…

July 6, 2021
In June 2021, the Correctional Service of Canada (“CSC”) invited dozens of community organizations to…

November 30, 2020
Justice Vs. looks at how solitary confinement is used within the Canadian criminal justice system,…

February 13, 2020
Today, the Supreme Court of Canada issued its decision granting the government of Canada leave…

Solitary Confinement: The Case Goes On

June 18, 2019
Canada’s solitary confinement regime is due to end on Monday but the government has sought…

May 14, 2018
Rights groups in legal challenges unite to urge government to comply with court orders.

CCLA Court Challenge To Solitary Confinement: The Next Step

July 21, 2017
The CCLA is greatly troubled by findings of the Coroner’s report concerning the death of…

March 10, 2010
PRESS RELEASE: Canadian prisons need to drastically re-evaluate their use of solitary confinement, especially where…